Call it what you may, luck of the Irish, tenacity, genius, timing, whatever it is Mark Ferguson (Ferg) of Ferg's Sports Bar & Grill (Ferg's) has defied the odds. With just a few weeks away from a huge milestone of 30 years in business as a local Tampa Bay iconic sports bar, we want to take a moment to reflect on this journey against the odds with the man himself.

Ferg is a native of St. Petersburg, Florida, a standout athlete while at Lakewood High School and a graduate of Florida State University. He began his career as a teacher in Pinellas County Schools and the bottom line is he had zero experience running a sports bar let alone a restaurant.

But he had an idea to open a sports bar in a rundown area of downtown St. Pete, known as the "Gas Plant District." With the help of family and friends in 1991 Ferg purchased an old Sunoco gas station that became the first Ferg's building, and in 1992 Ferg's opened its doors. 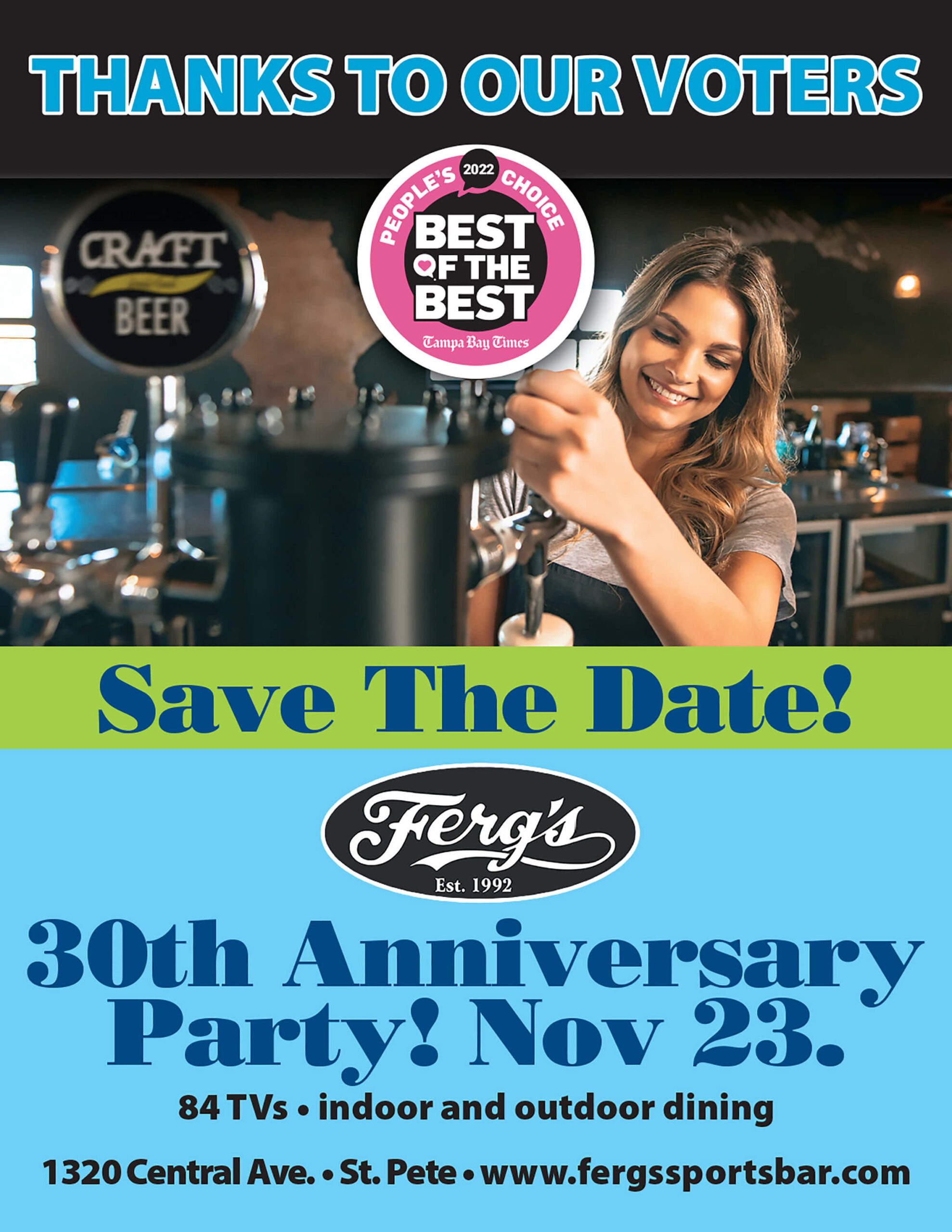 When asked what advice he would give someone looking to start a business and without hesitation he said, "it's all about creating relationships and owning your building or property." Today, Ferg's spans nearly 2 city blocks and boy has it changed. Looking back at his 30 years he reflects that he could write a novel of all that he has seen and done. When things are thrown his way with no control, like a worldwide pandemic, Ferg rolls up his sleeves and looks beyond the obvious. He was quick to pivot to allow customers to order themselves and implemented a state-of-the-art self-ordering system. Guests can now start a tab, walk to Tropicana Field, watch the Rays, return to Ferg's and continue with the same tab, no more waiting in long lines! He encouraged management and staff to be open minded to implement new technology for the future of the business. He also recognized quickly he had the space for a lot of outside seating and quickly established fun nooks and crannies to hang out. He's always been that way, maybe that's the luck of the Irish or the genius, but he is quick to move to the next great thing and not stay comfortable with the status quo.

On the other hand, some may call Ferg a hoarder or collector of junk, but the reality is Ferg's has literally become a piece of the Tampa Bay community. He has been repurposing material before repurposing was even a thing. Is that the tenacity, he will tell you it's pure economics. If he needed new floors and saw that Lakewood High School was replacing their gymnasium wooden floor, guess what? He was there to collect the old floor and give it new life at Ferg's. The entire 2 blocks are packed with local Tampa Bay materials. Seats from the old Bayfront Center, material from All Children's Hospital, Derby Lane Dog Track, city bus stops, gas pumps, a giant spinning globe sign that for decades stood outside the former World Liquors at Central Avenue and 16th Street. Most recently he acquired the Bonney-Read Krew pirate ship float that includes two bathrooms from Gasparilla that crossed over the Bay to live out its life at Ferg's! This is what he does.

Ferg's dream to be the premier sports bar in Tampa Bay was realized when Major League Baseball awarded St. Petersburg with the Tampa Bay Devil Rays (now Rays). Baseball has provided some of the largest crowds in Ferg's History. It's nothing to see 17,000 people for Opening Day and over 30,000 for the World Series.

Over the years, Ferg's has grown into what has become one of the most unique restaurant, bar and event venues anywhere. Eleven separate areas can host parties and events. Ferg's Backyard can host 3,000 for concerts, pep rallies, ESPN's St Petersburg Bowl tailgates, fundraising activities, and more. Private rooms can host birthday parties and class reunions. The huge patio has established itself as the gathering place to watch football, hockey and basketball games and is THE headquarters for Rays fans before all home games. Ferg’s also offers Axe throwing with Axe and Ale, Ferg's Dog Park and Grill, an ATM pizza machine a first of its kind in Florida. Ferg's Sports Bar was named Best Hangout in Tampa Bay and CNN named Ferg's as one of the Top 101 Sports Bars in the country.

Ferg invites everyone in the community to celebrate this milestone with him, his family, friends and staff with a "Against All Odds" 30-year anniversary party Wednesday, November 23 beginning at 11am.